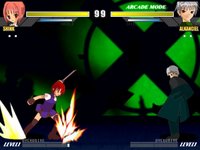 Emblem of Red is a fighting game by EXZAM that features eight characters, each with their own set of basic and special moves shown at the player selection screen.

Most of the moves are pretty easy to pull off, but important combos can only be discovered through experimentation. Computer-controlled characters are just too eager to show you how a multiple-hit combo is done.

Sprites and backgrounds are serviceable though a little on the plain side. However, the gameplay is good enough to make up for it's graphical shortcomings and will not disappoint fans of fighting games.

Press the F4 function key to switch between window and full screen mode.

Is there any way to play as the boss (in Arcade/VS mode)?

You can play as three secret charecters in VS mode by moving your cursor down past the pictures. There are three blank spots you can select, and one of them is the boss.

Anyone figured out all the combos for Xeon and Alkanciel?
Post a Comment
<< Home
Recent Comments
Recommendations