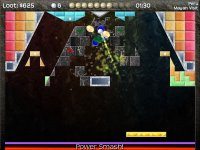 Funkiball Adventure is an excellent Breakout clone that comes the closest to dethroning BreakQuest as the best paddle and bricks game ever. The player is sent on a quest to recover stolen works of art from various locations around the world, busting colored blocks and collecting treasures along the way.

You can hit a ball instead of just bouncing it off your paddle by holding down the left mouse button and releasing it at the right moment, producing a Power Hit or Smash which causes more damage than usual.

Replayability is not an issue, as the stages have multiple objectives and can be attempted at any time for higher star ratings.