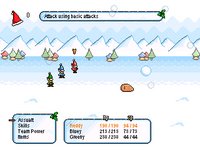 The Elf Brothers is an excellent freeware RPG that manages to resist the temptation of including too many collectible items and pointless side quests, yet retaining all the charm of turn-based battles.

A worthy winner of The Daily Click's Christmas Competition, the story can be largely ignored like most RPGs. Something about going on a quest to rescue Santa and saving Christmas, I suppose. The introduction seems awfully familiar but does a great job of setting up the scene nicely.

Your elves fight by assaulting their enemies, where a combination of attacks can be executed during that short period of time as indicated by a rapidly depleting gauge above the character's head. Press the left shift key for a light attack, and the Z key for a medium one. The X key can be used to execute a strong blow.

Instructions for special moves and character stats can be accessed by pressing the return key. The game doesn't drag on for too long and is relatively easy provided that your character engages in enough random battles to strengthen themselves for the final battle.