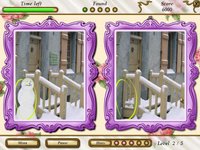 In Mirror Magic, the player is presented with two pictures and must find five differences before time runs out. The developers have attempted to add a little variety to the gameplay by introducing several types of picture quality degradation.

For example, colors will fade away as time passes. Pictures will be obscured by darkness, autumn leaves or even weather effects such as rain and flashes of lightning. Expect plenty of squinting as some of the differences are pretty difficult to spot. Memorizing won't be much of a help, since each picture has about seven or more differences in total and only five will be randomly selected.

Should you complete the story mode, bonus pictures are downloaded automatically and made available to play as a reward for your efforts.