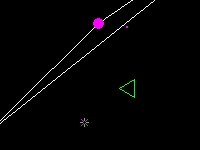 Blitzum is a remake of an old Atari cabinet game called Quantum. In the original, the player has to manipulate a trackball to capture particles by drawing circles around them using a comet's trail.

Your probe must absolutely not touch any particles except for electrons or risk losing a life. Nuclei are joined together at later stages, and coming into contact with these strands when red proves lethal as well. Quantum allows players to sign their names using the trackball, but this effort by Mark Incitti lets you circle the characters you want to appear on the high score table.

Players can select their starting level in increments of two from the main menu. Some basic gameplay instructions are shown just after the high score table.