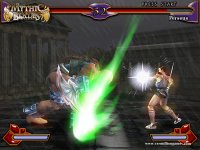 Mythic Blades is a 3D fighting game by Vermillion Games that features twelve characters from the Greek mythology, although only seven are available from the start.

The 3D graphics are impressive and it will run at any resolution on most machines. The men and giants have rippling muscles while the women are beautifully rendered. With the exception of the Medusa and Sphinx, of course. They're not commonly associated with good looks, but still imposing nonetheless.

Instructions for all basic and special moves can be found in the installation folder. Most characters are limited to two special attacks and one divine attack. The divine attack usually benefits the losing opposition as the power gauge shown at the bottom of the screen charges up faster than the attacking player.

The demo weighs in at less than 20MB. Although only showcasing two characters, there's really not much of an excuse not to try it out.