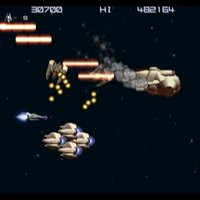 Arachnos is an effort by BootanSoft that is reminiscent of arcade shmups from the early 80's. I could not get this to work full screen, but changing to a lower desktop resolution helps. Controls are shown under the configuration menu.

The graphics may appear to be bland but does improve after the second level. Several weapons most commonly found in Konami's classic shooters make their appearance here, such as ripple lasers and options to name but two. Your ship does not explode immediately when hit, allowing options to be recovered immediately after the loss of a life.

End level bosses have several attack patterns, guaranteed to test your bullet dodging skills. The asteroids in stage two can actually be used as a temporary shield during the boss battle, assuming that you don't crash into any of them.