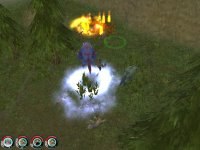 Monsters is the abbreviated title for a 3D RPG adventure made by TAGD, which was submitted to IGF as a Student Showcase competition entry.

The story is set in the near future, about a world being overrun by huge creatures. You play the role of a human survivor named Furio, carrying on a futile struggle and perhaps find a way to defeat these monsters. Fifteen minutes into the game, you will discover an object which grant it's user the power to resurrect opponents defeated in battle. Any creatures brought back to life in this manner can be assigned as your team members, assisting Furio in his battles.

A pretty good effort considering that it's free to download. Unlike other mods, you don't need Dungeon Siege to run it since the engine was designed from scratch.