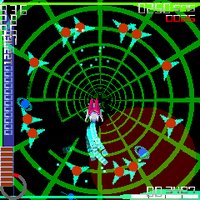 Crisis Divider is an older release from Onion Knights, the same development team involved in the production of Visionary Wings. Unlike other Japanese shooters, your ship is able to take more than just one hit before going down. Shield energy can be restored by collecting blue orbs left behind by the enemies you've destroyed.

The secondary weapon system is taken right out of RayCrisis, minus the need to target your opponents before launching the missiles. For a 50MB download, it's surprisingly short with only three playable levels.