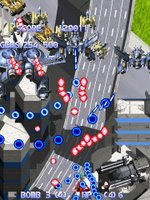 G-Wange is a disappointing shooter by CTREATAITG.rev, probably best described as a half-hearted effort even though it still features three ships and seven levels.

Your bullets look uninspiring, there's no cohesion between levels, enemy projectiles move with you whenever an attempt to avoid them is made and most sprites are poorly drawn. Not to mention that this is just the start of a very long list of problems.

Get the smaller demo instead. That particular version may be less ambitious but at least the game is not broken, plus it's about 60MB less hassle to download. A fall from grace indeed.

You guys are aware that the game is strictly incomplete, right? They barely reached 15% completion.