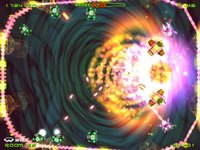 Mutant Storm is an arena shooter developed by PomPom Games, in which you control a ship equipped with directional firing much like Geometry Wars. Instead of vector shapes, most of the objects in the game are represented in 3D.

It's quite unfortunate that your progress is only saved every ten levels, leaving most users replaying the same stages just to arrive at a save point.