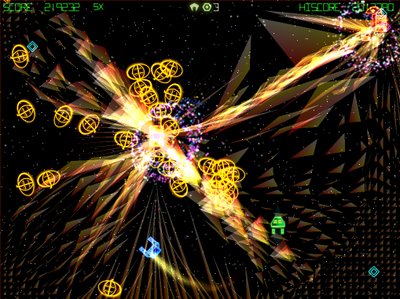 Not really. Just a halloween mod that Oddbob had been planning to develop. Grid Wars is not only a swell game, but it can be easily modified too.

He is also currently putting the finishing touches on a 360 shooter entitled Polarity. Expect it to be released next month. [Geometry Wars clones]

Al Emmo will be released at the end of August.

More games added to Cassette 50. Now featuring nineteen of the worst games ever.

The Retro Remakes competition will end on 31st of August. You bet I will be there trying out all 150 entries (assuming they all finish developing their games) and reviewing the best ones.

The 3rd Shmup-Dev Competition will begin on 1st of Sept, and ends on Jan 1st 2007. Remember to sign up for this one, 'cause the 1st prize winner will net a cool $250! (among other prizes, of course)

I've created a forum due to requests, but if no one uses it then I will probably take it offline.
Posted at 2:18 AM by Tim
post a comment  |  6 comments

Gah! Tim, I almost missed the bit about the forums!
Make it bigger, bolder and stick it at top!

Btw I would suggest using a more up-to-date forum package...

I'm new around here but is it me or does the blog entries grow every time I look at them?

Also where can I get that neat halloween mod?

entries are updated from time to time with only the freshest news, though no more than the latest five entries will be modified.

oddbob had not released anything related to the halloween mod except for one screenshot, but i'll report it if the mod is ever released. :)

svrman: i'm thinking of buttons on the top of the site. but it might be a while before i get around to doing it, since covering indie news is taking up most of my time. i'll take a look at any free forum suggestions. :)

Ok then thanks for the info (I'm the anonymous guy).

Don't remove the forums. I'm sure they just need some time before they've got the population they deserve :P