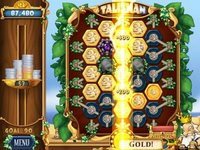 Talismania is a production by former team members of Sprout Games, now housed under PopCap. Known for their Frenzy series, this latest effort is pretty much Pipe Dreams with plenty of gloss. The gameplay system has been tweaked slightly, allowing for different strategies with the introduction of six-sided tiles. Your objective is basically to turn these tiles into coins, by connection one talisman to the other.

The distance between both talismans will determine the amount of gold earned. Magical tiles are introduced at a steady pace, but unfortunately no help screen is provided to summarize them for the players. Some fuss were made about the locked Hero Mode, though much of the fun lies in the campaign itself.