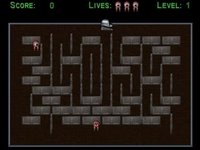 Drelbs is another lackluster remake that won't do much to attract the current generation of gamers, with only minor graphical updates on show.

The gameplay itself is rather uninspiring and won't hold anyone's attention for longer than a minute. Only marginally better than the original, which unfortunately is pretty bad in the first place.

yeah you peeps. Drelbs was a damn fine game in its day! Download this version and enjoy a play...
Post a Comment
<< Home
Recent Comments
Recommendations