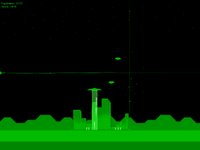 Alien Invasion is another 1 megabyte wonder from the increasingly impressive Game Maker community. Nothing particularly impressive but all the ingredients worked well together to warrant a mention.

You play the role of an old farmer named Jebediah Smith, who manages to intercept signals about an incoming alien invasion. As an eccentric inventor himself, he prepares to protect his little town with a set of energy cannons designed just weeks before.

A lot like Missile Command except for the part where you can shoot from two directions. The population does grow but it rarely happens fast enough to replenish the numbers you lost through alien abduction. Great stuff.