This great 3D RTS game is one of the kings in the freeware community. Glest could easily overrun the popularity of one or another commercial game, having a superb design and astonishing possibilities concerning modding. Play it, and you know what I am speaking of. 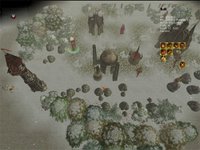 At the moment, there are two "races", both humans, but one time based on magic, the other time based on technology. The tech-trees differ, of course, and there are different units in each of the clans. While on the one hand you have sorceresses and wizards being able to summon powerful creatures like dragons, on the other hand the humans defend themselves with "robotics", a kind of mech-like, human-steered war-robot (three double words!). By building the library/blacksmith you can either build new units or upgrade existing ones to more powerful warriors or wizards.
Resources are being gained as usual: Peasants don't hesitate to follow your command when you are in need for wood, stone or gold. Energy resources are gained by contructing a kind of manafountain for the magic people and a farm for the technology people.

Glest is an ambitious project. From their homepage: "Glest is a project for making a free 3d real-time customizable strategy game." That means, the units can be changed, that is you can easily replace the models and script (with XML) new behaviours for them. Like that you can create a 3D RTS game with your own models and your own artwork. No surprise, the community is growing fast.