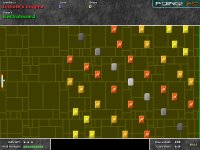 Imagine turning the Breakout gameplay sideways. Probably the exact thought that the developers of Poing had in mind. It's pretty good for an Arkanoid clone, in which the objective is to smash the opposing wall and access the next stage by sending your ball past the edge on the right.

It will probably take a while to beat the eighty levels included, though all can be accessed right from the start. An award-winning production with several recommendations under it's belt.

Oh, this was an unexpected blast from the past. I used to play the Amiga original, and it was great fun. Looking forward to testing this new version now.
Post a Comment
<< Home
Recent Comments
Recommendations