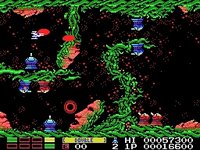 GR3 Re-DEATH is a Gradius clone by the team that released La-Mulana, a cult favorite among many even though the game was never translated. As hinted by the developers, this version would only be available for exactly one month since the web site will be taken offline soon.

A Java-enabled machine is required to play. The scrolling is poor though most of the power-ups from Konami's hallmark series do make their appearance. Perhaps one for the collection but doesn't serve much purpose besides that.

There's a la-mulana translation project going around. Not sure how much have been translated, but reading through the posts in the-underdogs' la-mulana thread indicates that it might be in a beta-testing phase.

Here's a screenshot of the translation that's available in the thread.

The text for La-Mulana is done and has been done for quite a while. But there are various formatting problems that have to be address first. After that is done, and final permission is given by the developers it will be released (the devs gave permission to start).
Post a Comment
<< Home
Recent Comments
Recommendations