Cry Havoc is a nearly flawless adaptation of a well known board-game which doesn't pay tribute to the computer concerning it's atmospherics. If you are interested in strategy board games you definitely should try this one. The graphics taken from the original game are beautiful and so is the enchanting music. Features the possibility of loading additional maps and has an editor for custom scenarios. 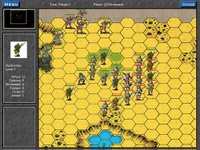 Cry Havoc: Test of Faith is turn-based. Two players at maximum play against each other in turns, which consists of 4 phases each: Offensive fire, where long range weapons are being shot, the moving phase, where you move your units, close combat, where, well... close combat is being executed and finally the Defensive Fire, where you mark some fields with your long range units. When, during the moving phase of the opponent, an enemy unit steps on this field, it will be shot by your warrior - you will have to guess, where the enemy might walk.

You can play the game on one computer, or via internet or LAN on two different computers, or you play against the computer - the game has an integrated AI.

GRR! I was going to post this one up on TIGSource months ago, but figured it was too old. Meh, oh well; Cry Havok is an excellent game; a little obtouse at first; but fun none the less.

same here.. i come on this one some months ago but dunno why i didn 't posted in my site..
To be honest i take some post from indiegamer hope tim doesn t get angry XD

BTW as always.. indygamer.blogspot.com/
for president! Best site on the internet! Ciao tim.

No no, you guys are mistaking what I mean. It's not that you beat me to it or anything. It's more kicking myself for NOT posting it months ago; when I found it it seemed like it had been out for a while and I wasn't sure how well known it was; so I skipped it over (Trying to avoid posting stuff that's generally known). But yes, still an excellent game, and you guys rock. Now if only TIGSource would behave itself.