The world of Netstorm is original, its gameplay fast paced and intense and the graphics and animations are excellent. I will play this title for a long time because its strategical depth is huge, despite of being an action game. 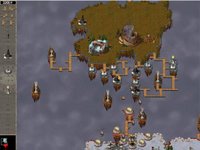 The gameplay really is special and interesting. In general you have the same elements as usual, small moving fighting-units, peasants, buildings with upgrades, defensive and offensive structures. And yet... everything feels and behaves differently. The whole world consists of flying island, for a start. For your peasants being able to collect their energy at the magical fountains, you have to build "bridges" to the resource island. To attack an enemy island, you again first have to build bridges. Combat is NOT, like in other RTS a big battlefield with hundreds of units you first trained, but it is a strategical placement of turrets, towers and other stationary weaponry. These offensive buildings you again only can place and the end of a bridge. You win by sacrificing the enemy priest on your altar.

In the "history of Netstorm" it says: "NetStorm: Islands of War was a true underdog of a game. Despite not having any publicity, NetStorm has been strongly supported by its players and fans throughout the years." And so shall it be for a long time, because it would be a great loss, if this treasure of a game would sink into the abyss of oblivion...

Holy cow, I remember playing this game in the first ever issue I bought of PC Gamer, yonks (technical term) ago. Was pretty fun then, but was only a demo, wonder how it's aged?

Last time I tried it out, it was still pretty fun. I was terrible at it, but I'd say it's aged relatively well.

This looks really cool... any time you've got a flying island it can't be bad :)