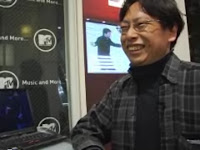 Click here for the original video on MTV. (may not work for residents outside U.S.)

The Japanese game designer gives one of his first interviews in English, and explains why...

MTV: What do you think... 'cause Geometry Wars seems to me, that's almost like a Kenta Cho game.

MTV: What do you think of that game? Have you been playing that a lot?

KC: Yeah, I like the Geometry Wars that was released with Project Gotham Racing 2, the original version. That kind of 360 degree shooter is unpopular in Japan. But Geometry Wars has very good gameplay. It also fit with the controller. The 360 has twin dual analog sticks. 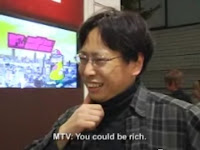 KC: (laughs) I am not good at it. Perhaps one million... twenty... over one million?

MTV: Would you actually be interested in having your games on Xbox Live Arcade?

KC: I have interest but I think that my game is too simple to release on the market. (points to Gunroar playing in background on laptop)

KC: So perhaps if someone would release my game on the consoles, the gameplay or the graphics and music should be refined.

MTV: Have game companies ever called you up and asked you to do work for them?

KC: Some people give me their e-mail about releasing my game on some console like an Xbox or PSP... but perhaps it is difficult to release my game on the market. 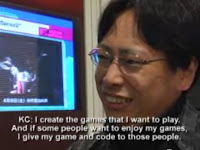 MTV: You don't charge money for your games. Why not? You could make a lot of money for these games. Why don't you do that?

MTV: You could be rich.

KC: (laughs) I distribute my game because I create the games that I want to play. And if some people want to enjoy my games, I give my game and code to those people. I don't have any intention to create money with creating games.

Huge clap for this guy. He's one of the last artists in the video games landscape...
Post a Comment
<< Home
Recent Comments
Recommendations