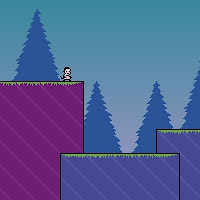 Knytt is the latest platformer by Nifflas, a developer who gained much fame after the release of Within a Deep Forest.

The story begins with an abduction and a crash landing on some unfamiliar planet, which means plenty of land to explore although there's hardly any interaction with other creatures. Save points are easily accessible, Knytt will glow red when in danger, and the shining beam of light will assist your search for the necessary repair items.

There's about sixty screens worth of adventure which equals to roughly an hour or two of play. Of course, This isn't a Nifflas production without several unlockables and secrets to reward the curious. A worthy tribute to Seiklus.

I'd be interested to know what you think Tim, because I played this and was thoroughly non-plussed by the experience. It's only the discovery of secrets that seem to give this game any sort of backbone.

I think this game is lovely!

P.S. - What's going on with TIGSource? It seems like every time I've gone to post in the past few weeks there have been server errors.

jimbob; it's spelt nonplussed, and it means to be confused or surprised.

I really liked this game. Nifflas didnt want to make it an extremely hard mega ultra puzzling game, he meant it as a chill out one.

Soon though, for all you dissapointed people, he is releasing the source code so expect to see some maps made by other people.

Anonymous: Well, yeh. I was confused. Because I was expecting to play something interesting.

I personally found it an excellent game. Nice to chill with something non-taxing for a few hours, just roam round after the items. If you let the ambient sounds and atmosphere draw you in it's really nice.

Yeah, I'm with Ishi. I found it a wonderful change of pace. Remarkably compelling for a game with basically zero challenge.

But I did basically know what to expect when I first played it.

I dunno. I gave it a go for about half an hour but got really bored with it all. It's nicely done and everything but just not for me. I wasn't a massive fan of Seiklus which helped influence it either, but least there the catchy chiptunes helped. The ambient stuff in this game with the lil odd bit of 'music' here and there actually irritated me.

I like Knytt - a very soothing experience to play. Sometimes it's nice to switch your brain off and play something a bit more... well... tactile. Knytt's ambience and atmosphere does a respectable job of this.

Great little game to chill out during noon time. Around 2 (max 3) hours of fun. Plus it's free.

I played it to the end. It was a very nice and cute little game, and I enjoyed every minute of it. It was a bit shorter than I had expected, but other than that, it was a very interesting experience.

Very 'Seiklus' indeed. I love Nifflas' method of creating atmosphere; the worlds he creates are exceptionally vibrant. While this is a very laid back a quiet experience, I found it to be quite enjoyable.

One thing I'm a little surprised no one mentioned was the simple feel of the controls. Knytt isn't your usual platform character... I'm not sure what it (he?) is exactly, but controlling him reminded me of a mouse or some similar small rodent. He doesn't run or jump very well, he scurries. He's very quick, even if he's not all that fast or agile.

If there's one thing I would have liked, it would have been an easier way to traverse the world towards the end. We get quicker and more aerial (and if there was more than that, I missed it), but moving from one end of the game to the other is still a dredging task. It's pleasant the first time, when you're exploring and enjoying getting lost, but later on, it's something of a chore. The teleporters hidden about help, sort of, but you're not all that sure about where they're taking you or if you even want to go there.

Perhaps the only thing I've found lacking in this game is interaction with the environment. While there's lots of little touches, like the houses and creatures about, it really has only a visual impact on the game. While this is used to strong effect to create atmosphere, it could be improved if the environment seemed aware of Knytt in some way, even if it wasn't majorly significant to the gameplay. (Animals running away from you or towards you. Characters looking at you, etc.)

Beyond that, I wouldn't mind having a greater distribution of power ups (less benefit from each, but more to collect) over the length of the game, rather than a larger boost towards the end.

Overall, excellent work, which is clearly no accident when matched against the later work Niffias has produced. Future productions have a high bar set for themselves.
<< Home
Recent Comments
Recommendations