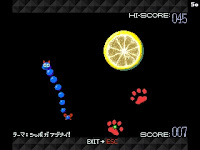 Shih Tzu informs of a new release from Pixel entitled JiLJiL. The game involves protecting your tail from a cat's pawprints and bouncing the sliced fruit around to increase your score.

Here's a list of game engines for budding developers.

The first is entitled Fester Mudd and the Curse of the Gold, a comedic western tale featuring more than forty screens worth of exploration.

The story: A poor lonesome farmer by the name of Fester Mudd lives an unexciting life in his isolated cottage in the middle of nowhere. Fed up with farming, he spends most of his time either taking naps or talking to himself.

One faithful morning this all changes, however, as he receives a letter from Bud, his long lost brother. Bud tells he has found gold in a valley located near a small town called Loamsmouth and wants Fester to join him. Not needing to think twice, Fester packs his belongings, hops on his mule and heads to Loamsmouth. And so the adventure begins...

Legend of the Lost Jewel is an upcoming AGS game that features only sixteen colors per screen.

The story: Hundreds of years ago, a jewel existed that was held by an ancient tribe called the Rannu. It was a jewel that they believe held the universe into balance. The tribe was destroyed by conquistadors and the jewels were scattered through time.

Happenstance causes Derek, the main character into a modern day story of murder, deception and adventure. He looks to find his way home from an archaeology expedition and ends up entwined in the middle of blood-thirsty power hungry people seeking to find the gem in their own desires of greed.
Posted at 8:18 AM by Tim
post a comment  |  4 comments

you might want to point out on that list of engines that you can use Flash for free: the Flex 2.0 SDK is a free download, and comes with an AS3.0 compiler. That and FlashDevelop is all you need to make .swfs that will run in the latest flashplayer.

fester mudd looks more professional than al emmo. though, i doubt himalaya will admit that, neither that fester is bringing back classic adventure games, as they seem to be the only ones capable. :(

That list of engines doesn't include Game Maker, which has probably produced some of the best freeware indie games around! Pff!
Post a Comment
<< Home
Recent Comments
Recommendations