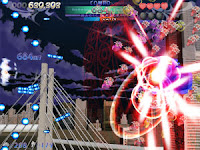 A 20MB demo for the horizontal shooter entitled Magical Amber was recently released by First Step. It has the same contents as Tobi Tsukihime, and there's not much difference except for the addition of a new menu.

To play, select the cat, choose your difficulty setting and stage by using the arrow keys, then press the Z key when the joypad twinkles. Holding down the primary shot button will allow you to fire rapidly. A small target indicating your hit point will be shown as well when you have the shot button depressed.