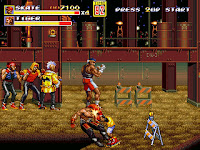 The new Streets of Rage Remake is set to be released next week, though a tasty preview with several playable levels can be obtained from the front page.

Featuring a selection of six playable characters spanning the entire series, it's also possible to choose a partner controlled by the CPU if you can't get hold of a friend to join the mayhem. All the moves have been retained with several new additions, plus more gameplay modes will be included in the next update.

Anyone who loved the original won't be disappointed with this effort.

Anyone - *anyone* who likes Streets of Rage should definitely try this remake. It's incredibly well put together and captures the classic solid feel of SoR in a way that many remakes miss completely. Looking forward to the full release!

my name is noah hall from saginaw michigan, i'm 18 years of age and i love all of your street of rage video games. but i can never find the streets of rage remake. i'm trying so hard to find it. i was hoping you will send so hear in sagiaw. i really really really want to buy your streets of rage remake. so please, please send some. i need that game to complete my colection of all SOR. and if you have any time can you send one to my adress at 1500 south 17th street saginaw MI, 48601 and thank you for making streets of rage, that's the bestest game i ever, ever play.

i hope to meet you one day. streets of rage are ansome, my favourite players are Alex and Skate. that grand upper is sweet and the eight come when you press forward and A. Skate, what i like about skate is, his a little kid, the brother of Adam. i love that move when he punch the enemies head off. the last time i seen adam moves was from the SOR1, i wouder what his moves are like if he was playable on SOR2,SOR3 and SORR. i list to your soundtrack from the SORR, THAT WAS COOOOOOOL!!!!!! AND ANSOME AT THE SAME TIME!!!!. i need that game, i gotta have it, i must have it. i promise you i'll never sell this game to anyone. i'll that all day. my name is noah hall. please, please,please,please send some of your SORR to saginaw michigan. email me back as soon as you read this meassage.
Post a Comment
<< Home
Recent Comments
Recommendations