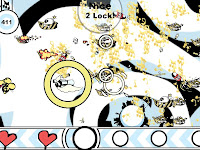 Much like Everyday Shooter by Jonathan Mak, Fire and Forget is a horizontal shooter which incorporates music as one of it's gameplay elements. The first part of the action involves targeting enemy ships and pressing the space key at the appropriate moment, which is shown as circles at the bottom of the screen. Basically a combination of RayStorm's missile lock and Dance Dance Revolution's gameplay elements.

The second portion of the game is a little easier to comprehend, just hold the space key to drop bombs on buildings for bonus points. The number of bombers in your squadron is based on the total notes collected during the previous segment.