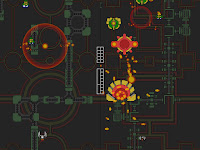 In Excellent Bifurcation, the aliens have attacked and their ability to exist in either or both of their world and ours has given them an almost unsurpassable advantage. Take command of a special fighter craft capable of existing in both realities at once and drive them back!

The form your fighter takes on the left has double fast-firing cannons and can charge to release up to eight seekers. It is ideal for destroying small and weak but numerous enemies. The right-hand form has a single powerful cannon which fires slowly but does far more damage, and is more suited to taking out larger enemies. It can charge up to release a wave which passes through things, damaging them as it goes. You can switch them between the worlds depending on what kind of firepower you need where.

The only vulnerable parts of your ship are the white parts at the centre. This means that the small form is much better at dodging than the large one. The only dangerous parts of bullets are the brightest (yellow or white) parts. Also, if you are shot down the form which was hit emits a green shockwave instead of a yellow one.

Press the Z key to shoot, X key to charge the special weapon, and C key to switch between two forms. Use the A key to activate autofire. You can change settings, like windowed vs fullscreen and whether it uses vsync, by editing init.txt.

I loved Linleys previous games, but this one I can't really sympathize with. Lacewing was difficult, but you were in control of your vehicle, Excellent Bifurication is just crowded - it looks stunning, just as all his other games, but I can't concentrate on two ships at the same time, which is a pity really. Or Maybe it's just me getting old... anyway thanks for the info.
Post a Comment
<< Home
Recent Comments
Recommendations