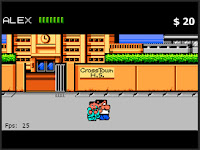 A demo of the NES classic, River City Ransom, remade in flash. Unfortunately it's only two screens of game, so there is little to do other than beating up opponents. Still, an interesting attempt that hopefully gets developed further.

A music game made in flash. Using the mouse, spin the pink bar to the right spot in time to score points. Song selection is a bit limited, but will probably expand soon. 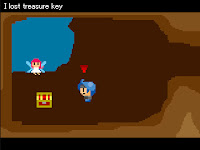 Xeno Raider is a short flash game by Babara. Explore a cave, collecting various items to progress through the game and ultimately save Princess Rena. Gameplay is somewhat like a simplified Zelda. Strangely, there is no HP meter of any kind, and you cannot be injured by enemies at all.

The mouse-driven movement system can be a bit awkward at times, but is mostly manageable.
Posted at 2:18 AM by Tim
post a comment  |  1 comments

There are actually two different possible endings to this game - wait for the credits to finish. Also, turn off the sound while playing, you aren't missing anything.

Click on characters you meet and you may get additional quests. Some actions can't be undone and are best accomplished before others.
Post a Comment
<< Home
Recent Comments
Recommendations