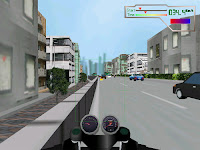 Rider V2 is a brilliant bike simulator with plenty of realism unseen in other similar attempts. The city is brimming with folks on their daily routines, which include the men in uniform doing rounds and will definitely halt your trip if any rules are broken.

The position of the mouse pointer in the target reticle determines the bike's speed and direction. Don't speed or ride past a red light when an officer is around, else you'd risk incurring their wrath and at least a ticket if you're fortunate.

There's a lot of personal touches added in, for example drivers turning on their signals before making a turn or even taking a smoke on a slow sunday morning drive.