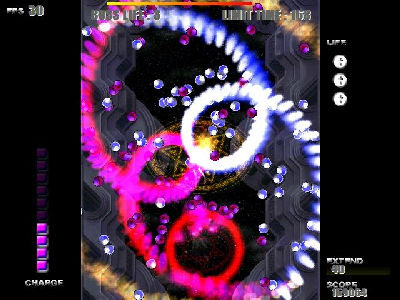 eXceed2nd-VAMPIRE- is a brilliant shmup by FLAT which mimics the polarity gameplay system made popular by Ikaruga. The color of the circle surrounding your character can be changed by tapping the C key. This will determine the type of enemy bullets that your ship absorbs while charging the special weapon in the process.

Press the Z key to shoot and use the V key to bring up the pause menu. There are only four stages in this trial version, unfortunately. The 70MB file package may take a while to download, but rest assured that it's one shooter well worth the effort especially for fans of Treasure's classic. 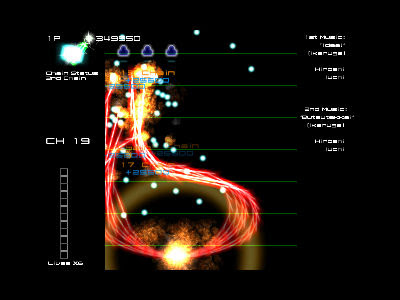 Kairuga is a short shooter demo by Kairos, also featuring the iconic gameplay system from Treasure's Ikaruga. You can switch the polarity of your ship by pressing the X key to absorb enemy bullets with the same color and charge your special weapon. The emphasis is on scoring where destroying three enemies of the same color in a row will earn you one chain, and bonus points are awarded for getting a high number of chains.

The only drawback to an otherwise brilliant shmup is it's length, with only one level on showcase.

rRootage is an abstract scrolling shooter created by Kenta Cho which featured four gameplay modes. One of them is actually based on Ikaruga itself.

IKA mode allows the player to switch between white and black. While white, similarly-colored projectiles reflect at the enemy, and vice versa with black. This mode tends to be the easiest of the four because you only have to dodge half the enemy's bullets at any given time, and also because the half that you don't have to dodge end up doing extra damage when you collide with them.

The game has the player fight a large boss. The boss changes form each stage, and there are five stages for each of forty levels per game mode. Stages cannot be played separately, but any level in any mode may be played without playing the lower-sequenced levels.

TIPS
Open eXceed2nd-TRIAL.exe with text editor and search 'GAMETIME++'.
You can see their... um... surprising programing technique around there.

I can't get Kaigura to run, it keeps coming up with that window "send error report" thing, in fact, it's doing that for any gamemaker game I play... help?
eXceed takes so long to download, I havent even been able to play it yet...
RR I wouldnt call that an Ikaruga tribute... It's just some random retro game.
Post a Comment
<< Home
Recent Comments
Recommendations