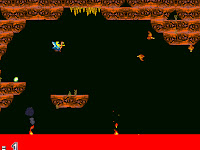 Joust 3 - Revenge of the Lava Troll is another brilliant remake by Jph, featuring seven stages worth of action as you battle in the air against enemy knights, bats and even pterodactyls. Hold the K or up arrow key to take flight, and press the J key to fire a stunner arrow. Replenish your supply of arrows by collecting golden eggs.

Touch the Tikki statue once the area is clear in order to advance. A handy save feature can be activated by pressing the F5 key, while quick load is possible using the F8 key.

Well, it looks and sounds OK, but it seems to be super-buggy. It won't run smoothly on my machine (tends to get bogged down when a level starts), and the bird-riding avatar sometimes gets embedded in the platforms/terrain. Too bad, because it seems like a fun game otherwise.
Post a Comment
<< Home
Recent Comments
Recommendations