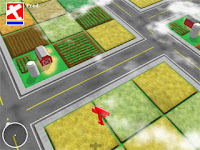 Aces High Over Verlor Island is a 3D top-down arcade shooter where you pilot a biplane, and compete against other people online or take on three different challenges. A few special maneuvers are at your disposal, and various power-ups occasionally appear in order to help you stay in flight.

Each of the three single player modes has an online high score board set up so that you can compete against others, and you can also compete directly with people in dogfights of up to eight people at once.