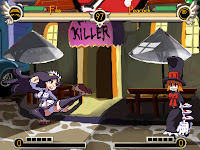 Skullgirls is a rare versus fighting game that isn't actually made using the popular Fighter Maker engine. The animations are jerky and default controls are rather awkward, with the I, O, K and L keys mapped to punches or kicks. The U key can be pressed for a defensive stance.

A work in progress that shows some promise, but fans shouldn't expect anything more than a technical demo in it's current state.

I don't see anything Capcom quality about this. Not bad effort though
Post a Comment
<< Home
Recent Comments
Recommendations