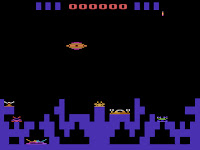 danjo's Z-Tack remake is an update of the Atari 2600 release, in which the player has to destroy buildings on the surface of a planet while dodging the missiles they launch in retaliation to your attacks.

Use both cursor and shift keys to fire in a certain direction. Shots can be fired sideways as well.