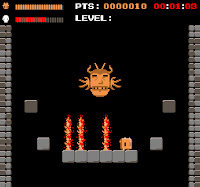 Boss Arena is an action game based of boss fights, unlike the heavy reliance on platforming skills as demonstrated by Lazrael's earlier release entitled Poyo.

Use the D or V key to attack. Hold the C of F key to jump. Push the F4 function key to switch between windowed and full screen mode.

There is only one boss battle to contend with at the moment, though the author has promised several more in the coming weeks.