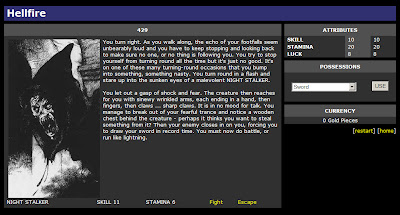 The Fighting Fantasy Project hosts a collection of original adventures based on the popular gamebook system. Originally devised by Steve Jackson and Ian Livingstone, Fighting Fantasy was a series of gamebooks that played out like choose-you-own-adventure stories. Each gamebook would consist of around 400 short numbered passages of text and the reader would be given options as to how they wanted the story to develop.

The gamebooks featured on the site are played directly through your browser. Game progress can effectively be saved by copying or bookmarking the current page's URL for later recall.

Adventures are typically fantasy-themed and have the reader encountering monsters and collecting possessions throughout the adventure.

Thank you. I'll have a happiness heart attack now.

I own almost all of the original books.
Not sure why.