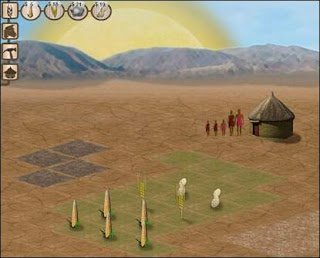 I've always found film critic Roger Ebert to be a tremendously engaging writer when he's in his element (film, primarily). This is why I get particularly annoyed that he turns into a reactionary curmudgeon whenever anyone suggests that games are also a form of art, even when (by his own admission) he's wholly unfamiliar with the subject.

I expected gamers would react to his latest uninformed salvo, but what I didn't expect is the responses (the printed ones, at least) to be by and large so lucid and articulate.

The key issue, I think, is the difference between freedom and liberty. Sure, there's no art in freedom -- in being able to do anything you want at any time. Liberty, though -- an allowance of choice, within a limited scope of options -- now we're getting somewhere. Especially if, within that narrow web, there is real, meaningful consequence to every action.

More than one writer points to independent games as examples of the medium's promise as an artform, including the Danish simulation 3rd World Farmer. (Some may take issue with the mention of a certain notorious RPG Maker game, however.) I doubt any amount of discussion will change Ebert's mind -- he appears too insistent on judging the medium by means of contrast to others with which he's more comfortable -- but it's nice to see such intelligent defenses out in front of the general public browsing his site.

The notorious RPG Maker game is Super Columbine Massacre RPG, in case anyone was unclear on the matter.

Third world Farmer is interesting (I hadn't played it before). Seems like a strange choice to use as an example though, considering how the similar Ayiti says the same thing with a lot more style and substance.

Man, did it take ages before I got even half decent in Ayiti. This one's even tougher, due to the massive amount of bad random events. Still great fun to play, but not really something to call a work of art. Games like Sunset Over Imdahl, Knytt (I concider that more a piece of art than a game) and the likes. Even Clean Asia could be concidered art. Something like the game equivalent of pop art or so. Ayiti and 3rd World Farmer are more there to make people aware, and don't really hold any artistic value besides carrying a message.

Ebert's not an artist, as far as I know he's never created a movie, painted a picture, written a story, wrote a song, etc., so why people are taking his opinion seriously on this I don't know.

Actually, he wrote the screenplay for the intentional-camp film Beyond the Valley of the Dolls, I believe. Also, being able to elegantly frame an opinion in writing is an artform in itself. Just go to the Great Movies section of his website for a vast and inspiring set of essays on what he considers profoundly good cinema.

He's not a douche, he's just old and set in his ways.

Didn't know about the screenplay. Still, he doesn't do it professionally, he's a movie reviewer. And a good one. But it's still sort of like a gardener talking about automobile mechanics -- no matter how good the gardener is at gardening, it's still something outside of his field.

What I meant was more like: there are people who spend their whole lives creating art. There's even an entire philosophical branch (aesthetic philosophy) that deals with this. Why give him more attention than them? Their opinions are much more informed.

"There's even an entire philosophical branch (aesthetic philosophy) that deals with this. Why give him more attention than them? Their opinions are much more informed."

And what if they don't think that games are art, either?
Are video games cultural artifacts full of man's suppositions and expectations about the reality they live in, and the illusions they live by; or are they primarily entertainment capsules driven by varying amounts of story?

There is an argument to say that some games, especially those predisposed to being boring (text adventures - come on, you know they are) can be full of story. But a story is not art, surely?

Some games have reached a wonderful apogee of graphical design - but when will a screenshot of such a game enter a gallery?

Finally, the quoted defence, "the difference between freedom and liberty", seems to me to be appalling rubbish. Artists may take liberties, but art is not liberty.

It is hard to explain what art is, or agree on what it should be - yet it is obvious that art is very different to games. I am also sure that games intentionally made to be art would not be very popular, so EA is not going to live up to its name anytime soon.

"And what if they don't think that games are art, either?"

To be honest, in the tit for tat of that article Ebert just comes across more than a little petulant, but I guess when responding to Clive Barker there's probably few other ways to approach the matter ;)

I'm not convinced that Ebert hasn't thought about this a great deal. On the evidence laid down, it seems he has spent a lot of time considering whether games have any merit as an art form, and come to the conclusion that as far as he is concerned - they're lacking.

I don't understand how or why his opinion should carry less weight than a videogame critic or game designer/coder/whatever. Surely, one of the fundamentals of art is you don't have to be an artist to appreciate or criticise art.

Art by its very nature, is a subjective thing and no opinion truly has priority over another and rubbishing someones opinion on the grounds that its "uninformed" seems far too much of an easy way out.

Certainly in this case attempting to discredit Eberts argument on the grounds that he's a movie critic smacks of desperation and leaves an uncomfortable air of supposed superiority hanging around.

However, subscribing to the view that games don't need to strive to be an art form, they already are and have been for years lends the majority of the discussions around the matter pretty much null for me.

Neither side of the coin is doing the industry many favours with their arguments - forever chasing their tails in circles and repeating the same arguments ad infinitum.

Ebert is not for turning, in the same way that you'll never be able to convince me that James Joyce is an enjoyable or essential read.

Such is the joys of taste.

It doesn't make him wrong though, just of differing stance.

I agree totally with Ebert, and am actually very glad video games are not art. :x

Well, I didn't even mean his voice should have less weight -- just that it should not have *more* weight.

I'd like at least *equal* weight placed on all the aesthetic philosophers, videogame designers, etc., rather than only on him, because he shouldn't be so central to this debate just because he's famous.

Everytime I heard a mention about Ebert's view of games as not art, I grunt and shudder in disgust. It's old news and pretty much everyone knows about it. It's one phenomenon that I can't begin to goddamn understand. I guess when
a celebrity yaps something about games, suddenly it becomes a big deal. Maybe when the snapple lady proclaims that games aren't art, people are going to make a big deal out of it too. It really shouldn't matter at all. Even if Jesus came back and said games aren't art, you're still going to love making and playing video games, right?

Hey Shih Tzu, thanks for the idea of adding black borders to images. Really cool. :D

"I guess when a celebrity yaps something about games, suddenly it becomes a big deal."

Uhh... This isn't Paris Hilton we're talking about here. Ebert's a film critic. I dare say he's got a fair idea of what constitutes art, even if you (and, incidentally, I) disagree.

Don't look at me, pal. I'm not the one who said "Surely, one of the fundamentals of art is you don't have to be an artist to appreciate or criticise art." I guess you can be Paris Hilton, or the Wayans, or the Westlifers, or what have you and still be able to appreciate "art."

Okey, so he's Ebert. He's supposed to be an intellectual and he knows what "art" is. Okey. Got it. So what? Kojima reiterated his point and he's a veteran game designer. It hasn't made the slightest damned difference, if you like making games, you'll keep making 'em... regardless of the public's perspective whether games are art or not. I don't get why game designers get so touchy about the public's perspective of whether games constitute as art or not.

Huh? Whud I do? I just used the image insertion tool in Blogger because I don't know what I'm doing.

The Ebert thing isn't a big deal and I probably shouldn't have brought it up. It's just that I read his reviews for years and generally enjoyed his essays, so it irked me more than it should when he started going off like this about things he doesn't especially understand.

The whole are-games-art debate bores me, since it's a squabble over the definition of a word more than anything illuminating. I'm much more interested in how specific games succeed (or fail) as art.
Post a Comment
<< Home
Recent Comments
Recommendations