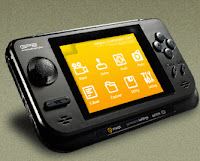 Entries for the GBAX 2007 Coding Competition are now available to download. This homebrew competition is in it's fifth year, and is proving the most fruitful. One can expect to find all sorts of homebrew games, applications, emulators and demos among the 60 entries developed with the DS, PSP and GP2X consoles in mind.

Hey, thanks - that DSNotes application from that page is dead handy. Not fancy or anything, and probably won't win the contest, but it's exactly what the DS needs and it's way easier to use than DSOrganise.