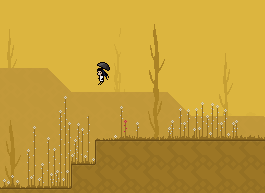 Nifflas has released Knytt Stories a couple of days ahead of his original August 30th release date.

Knytt Stories doesn't have a specific plot. Instead, each level is its own little adventure. A level called 'The Machine' is included with the game, where you have to stop a machine that draws the life out of the planet. An official expansion pack is also featured at the website with four original levels.

Knytt Stories is a 2D platform game that runs on Windows 2000, XP, and later.

I had to compensate for the fact that most companies releases their products later than the planned date... ;)

Even with 8Mb broadband, this isn't downloading nearly as fast as I need it to. GOGOGOGOGO!

Just finished The Machine. Wonderful. Thank you so much Niklas.

It's very much an improvement on the original game and the sound design is very nice indeed, although the enemies feel more like a concession to complaints about the first game than things which have been woven into the game design.

I think the idea of "stories" is a very nice one, though. There's too much commonality in your abilities between games for my taste (it kinda' suffers from Metroid/Castlevania ennui in that respect only it's rubbed in your face that much more by being in a single package) but the game presents a far more compelling experience this time around.

This game just oozes with atmosphere. I love it.

Don't forget that there are 9 (!) additional worlds to be downloaded from Nifflas' homepage...

Just downloaded it and I'm looking forward to playing. I'm liking the installer so far!

A wonderful surprise this evening :)

The soundtrack for this is phenomenal. This coming out made my day/week.