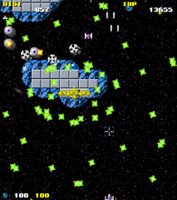 Val and Rick is probably the precursor to Gunroar, featuring similar controls but in a different environment. Only 2D sprites and backgrounds are used in what seems like a tribute to Xevious and Star Soldier.

It could be a prototype but the game is pretty much complete and bug free. No information page was ever made for it either. Press the Z key to shoot and hold down the X key to fix the direction of your aim.

A power-up icon in the shape of a tiny ship named Rick will appear if you collect enough blue orbs from defeated enemies, which is indicated at the bottom left of the screen. This will cause your ship to go into hyperdrive, that is until all energy is spent or your spacecraft takes damage from enemy bullets. Each successful hyperdrive attempt increases the counter by another hundred.

The X key can also be used to drop bombs on grounded objects. Tap the P key to pause. The closer your ship is to the top of the screen, the faster it scrolls.