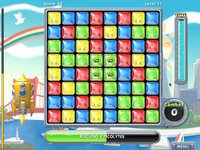 Spacebound is the debut effort from Gamenauts, a surprisingly slick production despite the simplistic gameplay it seems to offer. Captain Bloom is on a mission to recover cute little creatures named Picolytes, which of course translates to rotating blocks in the guise of puzzles.

By rotating four blocks of the same color to form the shape of a square, you'll be given several seconds to make more similarly colored squares or rectangles for a combo bonus. Scoring ten combos will reward you with Superstar blocks, which can be used to remove all blocks of a certain color from the playing field.

The rescue bar does tick away rather quickly but there exists a power-up to slow it down in later stages. Puzzles in the first two cities which you travel to will seem relatively easy but things do get slightly complicated once you arrive in the third.

Some blocks will be locked, hindering movement of other objects around it. Others have no color thus no matches can be made with them. Bombs often make their appearance when you least expect it, threatening to knock back any progress you've made unless they are defused quickly.