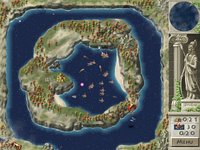 The objective of the game is to guide Ulysses and his fleet across the Mediterranean Sea, on a journey to return home after the grueling Trojan War was fought and won. In each level, a number of ships must make it to the exit area although multiple attempts are allowed should you fail the first few tries.

Gameplay involves using currents to move the fleet around. Simulate the motion of drawing a line using your mouse, and a strong current will appear. With any luck, the ships will use the currents to inch closer to the exit.

It does feel like playing Psygnosis' Lemmings at times, minus the need to learn new skills.