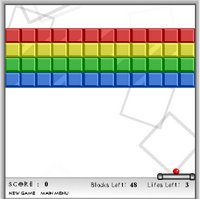 HAMU is a Breakout game by Thin which bears some resemblance to Nurium Games' BreakQuest. Hitting blocks with the ball will cause them to spin out of their places, simulating gravity to a certain extent.

Levels are not numbered, instead named according to it's general theme. Missing power-ups and slightly erratic animation are two minor drawbacks to an otherwise decent effort.

Pretty nice from a stylistic point of view, and the gameplay's nice too. Still, it inspired me to go make a breakout game. Er, another one. A better one.
Post a Comment
<< Home
Recent Comments
Recommendations