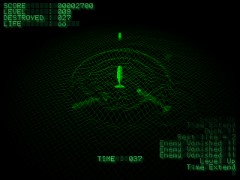 Invisible Vision is another excellent game from keim, developer of Nomltest FS and Sky Swimmers' Heaven. A departure from the rest of his efforts, it involves engaging sea battles with enemy submarines while avoiding mines and surviving the occasional boss encounters.

Wireframes are used to replicate the surroundings of a dark ocean. With careful observation, it's quite easy to detect enemy ships based on the ripples caused by their movements.

The arrow keys can be used to move your ship around. Controls can be slightly awkward to learn at first but the effort will be rewarded with an amazing gameplay experience. Press the Z key to launch a torpedo. Every missed shot costs three seconds, and the game is over when you run out of time.

If green is not your favorite color, there are two other executables to start the game in gray or blue. It's quite unfortunate that the fun only begins after the tenth level.

Naval simulation at it's best. Seek and destroy.