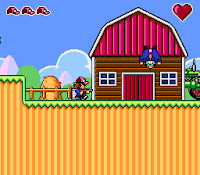 Hank makes some pocket money by selling eggs, and plans to win the yearly egg contest with a huge egg. NationalLiberal, on the prowl for revenge, steals the big eggs and sends out his minions to paint and hide the rest of the eggs. Hank, along with his old pal Bernard, has to go through twenty-seven levels, meet around twenty different enemies and search for hidden bonus levels to defeat NationalLiberal once again and get his egg back.

Bernard and Hank: Springtime Again is a straightforward platform game. The graphics are as simple as in the first game, but the gameplay, sound effects and music tracks have seen improvements. Also included is the minigame Liberball and a jukebox to listen to all music tracks.