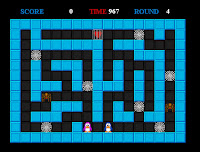 Binary Land is a remake of an old NES action game, created with Clickteam's MultiMedia Fusion 2. The goal is to guide two penguins to opposite sides of a heartcage. The trick is that you control both penguins at once and one of the penguins movements are mirrored.

Use the arrow keys to move both penguins around, and hold the left control key to shoot bugspray. Handy for freeing your partner, removing webs and spiders. Press the escape key to quit game at any time. Game is saved automatically when each stage is cleared.

A gamepad can be configured by changing the control type at the options screen, with the control key mapped to the first button on the joypad.

Wow. It feels so weird seeing my game on this site that I visit everyday. Thanks for finding and adding it. It's an honour :)
Post a Comment
<< Home
Recent Comments
Recommendations