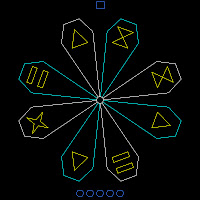 Chirality is a one-switch game of reflexes and perception. The menu cycles through four choices - three different modes of play which are increasingly tougher, and the exit command. Press the space key to select a play mode, the game will begin.

There will be two sets of vanes in the play area. These look somewhat like fans rotating. There is a white set of vanes rotating in one direction, and a blue set rotating in the other direction. On both sets of vanes are yellow symbols. There are six different symbols in all.

As the vanes rotate they will eventually overlap each other. If you hit the button when a match overlap is happening, you score one point for each matching pair. If there is a match and you don't press the button before the overlap ends, the match pairs turn red and disappear. They are also replaced by new symbols, but you lose one try in the process. If you press the button when there is no match, you also lose one try.

There are three different play levels in this game, each of which is harder than the previous one. You start each game with five tries, which are shown at the bottom of the game screen as blue circles.