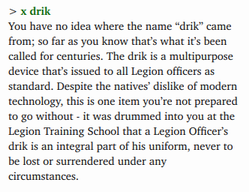 This actually happened a month ago, but the winners of the 2006 XYZZY Awards for interactive fiction have been announced! Top honors went to Eric Eve's science fiction story The Elysium Enigma, while Andrew Plotkin's Edward Gorey homage Delightful Wallpaper and Emily Short's Floatpoint were among winners in several other categories.

The Elysium Enigma casts you as an Imperial officer charged with contacting a mysteriously technophobic settlement on a remote planet. I've only had a chance to play the first five minutes of it, but the premise seems intriguing so far.

For elegant multi-platform interpreters that should be able to run most or all of the nominated titles, I recommend Gargoyle for Windows or Spatterlight for Macintosh systems.