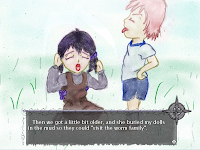 Fatal Hearts by Hanako Games has been released. It's a visual novel with a nice variety of puzzles. The mysterious story is about two teenage girls -- one goes missing, and the story proceeds at a relatively fast pace. Besides the puzzles, there are also dialogue choices, but those don't seem to affect the game very much (at least that I could tell from the demo). EDIT: The author of the game just told me that the dialogue choices do in fact affect the game quite a bit, it's just that you don't see the branching and the impact of those choices until later.

To me it feels more polished and professional than previous games by the same author, but it's probably not for everyone -- it's a visual novel with puzzles, and fairly linear even for an adventure game, but it's well-written and has a few memorable moments and lines. Some of the puzzles were a little difficult for me, but I managed to solve them all after some thought.