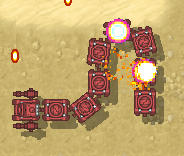 Mimizu Panzer is basically a clone of Snake, with some Japanese shooter elements. In the game, you control a line of panzers that is practically invulnerable to enemy fire except for the leader of the pack.

Blow up the enemy forces in each level to proceed to the next. You can charge up the panzers' flamethrowers by letting them get hit by enemy bullets, then proceeding to shoot them yourself to release a burst of flames.